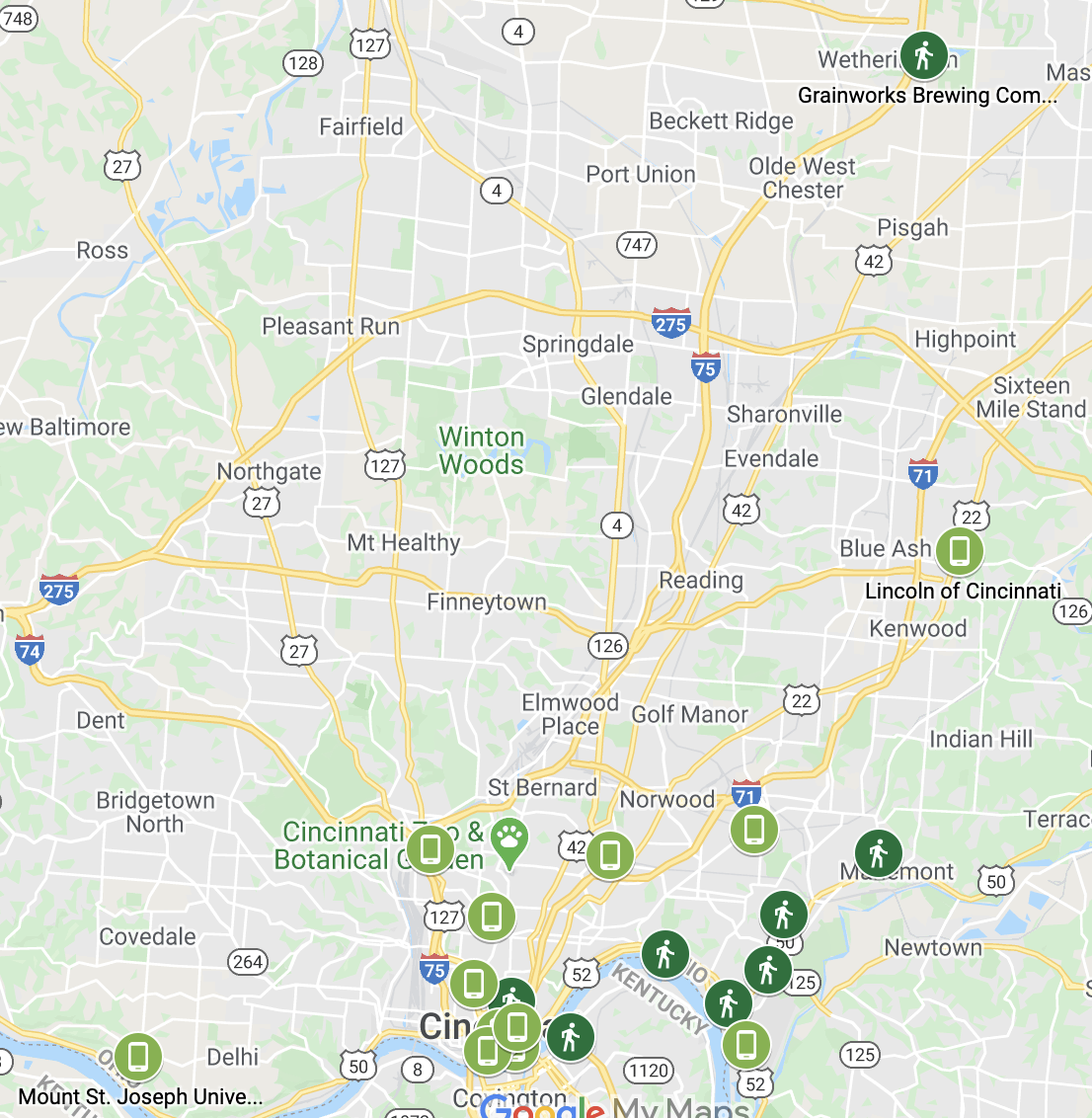 (see below for each location’s details)

Pitstops (Go and take a selfie at these pitstops, tagging @cincincinnaticoncours AND the business)

*Must be 18 years or older to play

Listing of Specialty Awards and Trophies:

Porsches were featured at the 2018 Cincinnati Concours d’Elegance at Ault Park with 70 of the German Cars on the field for the 70th anniversary of the marque. The celebration continues in 2019 where several of Porsche’s first model, the 356, will be exhibited in the Sport Classics display.

The three Porsche 356s are decidedly different despite the similarities – a Coupe, a Speedster and a Roadster make up the trio of rear engine, air-cooled wonders. This is your chance to see how Porsche differentiated, speed, luxury and elegance into the early cars.

The elder stateman of the group is the 1956 356A Coupe belonging to Mike Immarino. This early A series car is the oldest of the “European Scripted” cars remaining, is equipped with the original 1600 Normal engine and has been heartily enjoyed since its restoration. A lovely silver exterior is complemented by a fetching deep red interior and beige steering wheel and knobs; a fine example of early Porsche luxury.

The antithesis of the luxurious 356A Coupe is the 1958 356A Speedster of long-time Concours supporter Andy Manganaro. The Speedster model was created at the request of US importer Max Hoffman to provide a lightweight version of the 356A suited to racing. This particular Speedster has been an award winner at a number of Concours d’Elegance and sports a fabulous local history. Lithesome is an apt description of the Speedster with its low removable windscreen, spartan interior and Super 1600 engine; an all numbers matching example in dark green with tan top and interior this car will spark dreams of flat fours, swing axles and baggy tops.

The youngster amongst the Porsche 356 contingent is the stunning triple-black 1962 356B Twin Grill D’Ieteren-bodied Roadster from Terrance Orr’s collection. The D’Ieteren Brothers built 249 examples in their Belgian Coachworks for 1962, the last year of Roadster production. Sporting a Super 90 engine, the Roadster balanced performance and elegance; as the successor to the Speedster it also featured a  removable windscreen for racing, however with roll-up windows and more elegantly appointed interior.

These three luscious sports cars will compare and contrast the engineering influences in the early history of Porsche that made the brand what it is today. See these fine examples and over 200 other wonderful vehicles in the gardens of Ault Park at the Cincinnati Concours d’Elegance on Sunday June 9, 2019. Tickets and information are available at www.ohioconcours.com.

We are pleased to announce our Honored Collectors for 2019, Judge Joseph and Margie Cassini of Llewellyn Park, New Jersey.

The 1931 Duesenberg Model J Tourister by Derham, designed by Gordon Buehrig, is one of eight built on the Model J chassis. It was once owned by Andy Granatelli.

The 1931 Stutz DV-32 Convertible Victoria by LeBaron is believed to be the only one in existence. It was owned for many years by William Bools of Cincinnati.

The 1961 Ferrari 250 GT Cabriolet Series II is one of only 200 built. Its coachwork is by Pininfarina.

The 1927 Isotta Fraschini Tipo 8A S Roadster by Fleetwood is the “Valentino Roadster,” custom built for silent screen heartthrob Rudolph Valentino, who died before delivery. It was awarded Best of Class at the 2018 Pebble Beach Concours d’Elegance.

These extraordinary representatives of the Cassini Collection will be displayed together on Ault Park’s upper field at the 2019 Cincinnati Concours d’Elegance. Click here to get your tickets.

Mid-Century Modern: What Does It Mean—and Why Are Cars From This Era So Special?

In an era defined by the end of World War II, new innovations in materials and design brought fresh life to consumer products used by the masses. Hailed today as Mid-Century Modern, or MCM, products such as furniture, appliances, airplanes and cars were reinvented using the new technology and processes that were emerging in design and production.

The MCM movement encompassed two seemingly opposite approaches: the first used industrial materials, such as steel, plywood and plastic laminates, and reveled in synthetic colors and mass production. The other side of MCM took its cues from Scandinavian design that treasured handmade items and used natural materials. In both cases, however, the common denominators are sleek lines, organic forms, and a celebration of the materials being used—plastic looks like plastic rather than wood, aluminum and steel are polished to a sheen rather than being covered with upholstery, and so on.

In the early years of this period, designers had license to take chances and risks to increase sales, which had been almost nonexistent due to the total commitment to the war effort by the industrial segment. Patriotic Americans had been saving and conserving at all cost during the war years, for the sake of the country. When the flood gates opened, consumers were hungry and ready for something new and different.

Designers and crafts people were the first superstars of this era, with well-known companies and small startups creating products the likes of which this country had never seen. Ray and Charles Eames’ iconic furniture designs, such as the famous 670 lounge chair for Herman Miller, are all considered classics—with some still in production today. The designer famous for the shape of the Coke bottle, Raymond Loewy, also designed the Starliner, Hawk and Avanti models for the Studebaker Car Company. With Bill Mitchell at General Motors, the Chevrolet Sting Ray, Cadillac Eldorado and Buick Skylark were huge hits.

In cars, you’ll recognize the Mid-Century Modern style in big, swaggering American cars generously outfitted in chrome, fins, and pastel colors. Moving into the 60s, the aesthetic is influenced by European cars and becomes sleeker and more compact, with low-profile cabins and metallic paints.

The fascination with Mid-Century Modern continues today. The collection of exceptional automobiles at the 2019 Concours d’Elegance will showcase how America, with its power, innovation and artistry, was on the cutting edge of this unique styling period.

Proceeds from the Cincinnati Concours d’Elegance and associated events are contributed to the Arthritis Foundation’s local chapter to fund programs supporting kids with Juvenile Arthritis and their families. The Concours Foundation is proud to be the primary sponsor of the JA Family Camp, held annually at Camp Joy in early October. Click this link to see the video of the 2018 camp:

Our 2018 galleries of participating cars and motorcycles are now available.

Listing of Specialty Awards and Trophies:

Congratulations to our 2018 Best of Show winners: